This weekend was…long.  Awesome, in just about every way, but long.  My aunt wasn’t able to watch the Things on Thursday, so I worked from home.  BB left for a road trip to visit his sisters early Friday morning, so I was alone with them while trying to work all day Friday.  It’s just past 6:30 right now and I’m typing this while waiting for the girls to get up – Daddy will be home late tonight and then leave again for rehearsal.  But the weekend was gorgeous and amazing and I can just have extra coffee today to make up for it, right?

Saturday, we packed up just at the girls naptime to pick up BB’s mom & visit his sister and brother – in – law, who live about 1.5 hrs south of us.  The girls napped in the car.  Big (my nickname for his sister) is preggo, as well as their sister in law, so we had  a day of baby shopping planned out.  I’ve gotta say, I was nervous – the last time we spent time with Grandma (for her BIRTHDAY, no less) the girls were grumpy and wanted nothing to do with her.  It was pretty upsetting.  But they were totally affectionate and adorable and down for anything, and we ended up having a great day!  I was really glad we made the trip down.  We hit up Buy Buy Baby, then swung by the Cheesecake Factory for lunch (first time for both the babies AND grandma!) and stopped by Babies R Us to round things out.  The girls were EXTREMELY good the whole time, hanging in their carts and making faces at people and trying to snatch toys off the shelves – but no crying and freaking out.  And between the two of them, they ate an ENTIRE kids meal at lunch.  Unfortunately, that good mood ended about halfway home, when Mads woke up from her nap to realize she was in the car and that is UNACCEPTABLE.

Sunday was an equally low key day.  We had breakfast and got dressed, hanging outside before naptime.  It was after nap that things really got started – my sister came over, and she joined us & Grandma on a shopping trip to Lowes to get plants for our new garden (herbs and veggies, yum!) and then Costco to do the weekly shopping trip (which is usually a Pop Pop job, but there was a plumbing emergency in the family).  Again, the girls were crazy good – Making faces at people may not be the NICEST thing, but at least they weren’t having fits, you know? 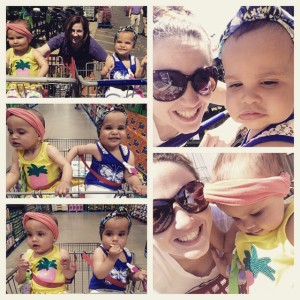 This photo straight up stolen from Auntie Kelly’s Facebook

After running errands it was time for lunch.  Rosy ate all the chicken & pasta that I put before her, but Maddy extended her hunger strike – throwing everything on the floor for Brooklyn to enjoy.  After lunch it was naptime – but apparently nobody told the girls.  After a half hour of sisterly babbling, they started crying and refused to go down.  So they came outside and supervised the planting of the garden.  I finally got them down for a nap after the garden was planted – around 3:30 (after half an hour of alternately babbling / crying) but they were up again by four.

We played out in the backyard for a little while post nap, and then it was time for dinner.  Chicken sausage – for the first time! – was a hit.  Rosy gobbled it all up.  Maddy continued her hunger strike until halfway through dinner – IMMEDIATELY after I tweeted about her refusal to eat, she began eating.  Of course.  After dinner it was the usual bath & bed – though they’re getting too big for their laundry basket bath situation, and I can’t wait for daddy to be home to help transition them to the regular tub.

All in all, it was an excellent weekend – especially considering how nervous I was going into it, since BB was out of town all weekend.  I’m looking forward to an equally amazing next weekend. 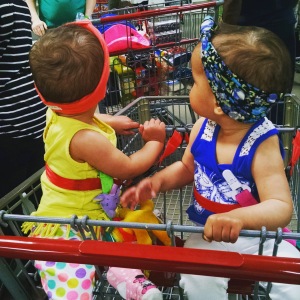 Gotta give credit to Costco’s double carts. The girls liked being near each other.

One thought on “Spring Weekendddd”